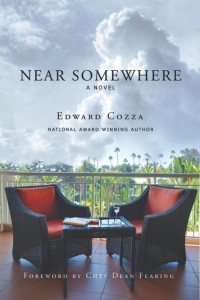 The iconic bookstore Warwick’s will be hosting National award winning author Edward Cozza on June 2nd, 2015 at 7:30pm to debut his second book Near Somewhere.  Doors will open at 7pm.  This event is free and open to the public.  There will be music by The Winchester Boys.  Refreshments will be available.  You may reserve seating by calling Warwick’s at 858-454-0347.  Book’s purchased at Warwick’s will be signed.

In Near Somewhere Townes Mantle has hit the wall in his life and now his lifestyle of endless travel is rapidly making his nerves unravel.  He has his dog and he his band partner Zeeder.  But he needs more.  He needs someone to share his life with– someone to tell him he is all right, tell him he isn’t going to fall apart.  He just needs to rearrange, get out the novel he has been writing and the universe will talk care of the rest.  That is when three intriguing women enter his life and the complications begin. With the return of characters from the first novel in the series Nowhere Yet, Annie and Kat, the cross-country journey begins, New York, Dallas and the California wine country serve as the elegant backdrop for explosive connections. With a Foreword by Chef Dean Fearing known as “The Father of Southern Cuisine,” Near Somewhere takes the reader on a delicious journey and leaves them hungry for more.

Get out and connect with award winning author Edward Cozza June 2nd at Warwick’s in La Jolla at 7:30pm.  Click here for our location.

Warwick’s is located at