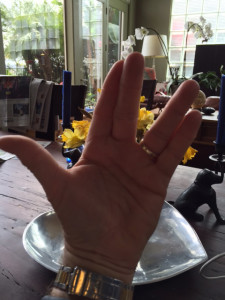 I had inherited an old, portable, black and white television.  Some of you might have no idea what that is, but I assure you, at the time, it was a very valuable commodity.  I was officially a college freshman.  Far from home, with no friends at the school.  I did, however, possess a stereo and the above mentioned piece of equipment.  The stereo played record albums, which those of you who don’t know what the other thing is really won’t know what a record player is.

It’s 4 PM.  I don’t know what to do.  I do know I’m tired of studying.  I guess, I’ll sit down and watch Star Trek, because apparently, in this new world, the one where I don’t have any friends, but where I do have a black and white, portable television, Star Trek is on everyday at 4 PM.

A knock on my dorm room door.  Someone must be lost.  The janitor must be here with the cleaning police.  Nope, it’s a guy.  Just a guy like me.  He heard my TV and wanted to know if I he could watch Star Trek.  I made my first friend.

Others came in the days after that.  4 PM, my room was the place to be.  That eight dollar reclining lawn chair I had?  You had to get your reservation in early to get that seat, or provide a substantial tip to the maitre d’.  When the program ended at 5 PM, we made a mad dash to the dining hall.  We had to beat the rush of everyone else doing just what we were doing.

Yes, I was a fan of Star Trek when I was a kid, and I watched the movies later, though I never attended a convention, never wore any Star Fleet uniforms.  That bit of science fiction brought great amusement, brought a daily study break, and… brought new friends.  I thought about all these things yesterday, when I heard that Leonard Nimoy had passed away.  I always had great respect for him.  I thought that if I ever ran into him, rather than just gush, as most fans do, I would tell him this story.  Sometimes people and things have an impact beyond the normal.  The tricky part, and it is tricky, is being able to recognize that.  I can’t say that I always do, but I did this time.