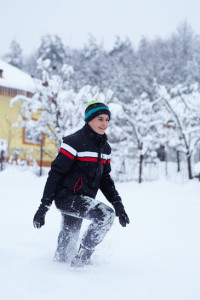 My brother & I went walking, down the snowy, gravel roads of the town where my Grandparents lived. We were probably in grade school. (I don’t know what they call it now. Pre-pre-pre college maybe.) It was really cold, the snow packed pretty good. We were told not to go very far, standard command.  We disobeyed, which was not standard, actually. Today was different.

We armed ourselves with some rocks, suitable for throwing, should we get harassed by any number of dogs that roamed free in the small, Western Colorado town. We loved dogs, still do. You just had to discourage some of these dogs from having part of you for a snack. We didn’t want to weight ourselves down too much. We already were carrying twice our weight in clothing. Modern, hi-tech fibers had yet to be invented. We bore some resemblance to dark-wool-&-flannel-growth-stunted Michelin men. (I don’t think I have worn galoshes since)

The air cold, grabbing you as it went inside you, laughing at you as it left you. We made sure to have a contest at who could make the most unusual exhale. (Might have been practicing for the Fuente’s that would come much later in life.) We figured-out pretty quick that this was not a fun contest when it was this cold. There were other contest, as well, I forget what they were.

We looked at the old houses, mountains, trees wrapped in snow, first hearing, then seeing the occasional flock of geese overhead. We (of course) walked further than we were supposed to, yet luckily met no untimely demise. We saw the vapor rising from the coal-fueled furnaces in steady little puffs. The locker plant across the highway putting out what was a much greater plume than the homes.

Checking-out the battened-down commerce of Main Street, the pool hall my Grandfather owned, the drug store my Grandmother ran, the market her sister owned. All closed for the day. We loved going in those places when they were open. We peered in the window now, viewing the sleeping green tables, the resting goods (I was a better pool player at 10 than I am now). We would probably be in those places tomorrow, when they were open again.

The rocks were not used for their appointed purposed, and were skated across the frozen irrigation canal behind my Grandparent’s house. No animals were harmed in the completion of our sojourn.

There was mountains of wonderful food at the end of our journey. People, lots of great people. We had our gifts before and after. So many I couldn’t count. They were not the ones you might think. I still have them. They stay with me to this day.

I miss this place, this walk, these landmarks and these people. I wonder if they know how much I think about them still. It was great adventure, braving the weather, the wild animals, the deserted streets. It was cold, it was quiet, it was magical. It was Christmas.