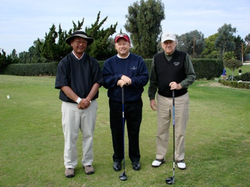 Every Saturday morning for close to 9 years I came to meet with him. He used to joke that the only excuse for not coming was lightning. “Bad Ice,” was not an acceptable excuse. Every Saturday, almost 9 years. It stopped being about the golf, a long time ago.

I told him it was cheaper than seeing a psychiatrist, and that until he fired me… I was going to keep coming. A friend once asked me how my lessons were coming and then suggested I was being sold unnecessary sessions. I had 2 responses:
1) It’s making Lester crazy, but it’s helping me a  lot.
2) IT STOPPED BEING ABOUT THE GOLF, A LONG  TIME AGO.

What most people didn’t pick-up, was that he was  teaching about developing a good pace, a good  rhythm with your life, more than just your  golf  swing. He said little when you had a session with him. He  was always aware of not wanting to confuse you, which of course, in my case, everything confuses me.

With him, there was the famous tilt of the head,the crossing of his arms. But he would sometimes merely say:
“Huh!?”
“What are you doin!?”
“I don’t get it!”  Though you knew he always did get it.

A lot of times, if I were having a bad day somewhere  else, I would come and just sit with him, no clubs.

IT STOPPED BEING ABOUT THE GOLF,  A LONG TIME AGO.

He always spoke about getting better results by doing less. Most people take this to mean this  only about the golf swing. Those that knew  him, knew it ran much deeper than that.

The real lesson was that your goal… could be better achieved with purity and intention, than it could by strength, or by might.

He helped people to learn to enjoy themselves on the golf course by teaching them that taking their time, enjoying the  moment. People that knew him, knew he was talking about using that principle for your life, as well.

I didn’t play golf when I was younger. I waited until I  was in my 40’s, when I was more in-flexible, more  stubborn, body parts less responsive. Lester always said the youngsters were easier to teach, because they had a better                     visualization… of possible success.

That being said, I never played golf with my Father when I was growing-up, which was a shame.

He came-out to visit a few years ago, before  he gave-up the game, and he and Lester & I played together. I like to think Lester gave me back a piece of my youth then, and forever.

In his way, which was more complex than it appeared, every minute spent with him, taught you more  than you could ever imagine.

Every Saturday at 9:30, I will not forget that.

But every Saturday at 9:30, I will truly miss that.