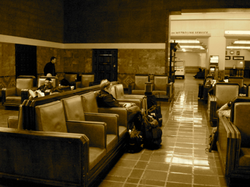 We took a train trip the other day. Not a long one, a couple of hours. The thing about doing that, is that time seems to move slower. I, of course, am more than all right with time moving a bit slower. I cannot prove it is going slower, it’s just a theory I have. I am sure you know, that when it comes to theories like this (see A. Einstein, Relativity, etc.), a writer of fiction, like me, is the go-to authority.

We did not have to wear slip-on shoes. We did not have to take our belts off. No one strip-searched us before we got on the train. No one made us feel like dirt before we got on. I, unfortunately, understand the above procedures are required now in the terrorist-filled vacuum we now live in, and I am thankful for the people that perform these duties that make it safer for us to fly. It just feels better when you go somewhere… and you just show-up and go. Go with everything you had in your pocket when you left the house.
More, even.

Enough of the rant.

I have the thinest of memory (my hairline is maybe thinner) of going with my parents to the train station, to pick-up relatives. Train station, not subway station. Hey, we are out West. Something about riding underground never caught-on here., though I am ok with it. The train station, of this sparse recollection, was bustling, which was a wonder, because no one had to stop & take-off their:
Belt.
Shoes.
Pants.
Lip balm.

No, they had time, but it still seemed busy. Maybe they needed more time to smoke, because everybody was. People all wore hats (facing forward, not backward). People dressed-up (no one’s pants looked in-peril of falling down). People seemed… happy. I was a kid, what did I know? (I knew there were candy machines, & pop machines in that station, that’s what I knew.)

I do not have intimate memory, nor experience with train travel in my youth, so there is not an overwhelming  imbalance there. I just know we used to pick people up at the station, and no one looked like they wanted to fight somebody, or throw-up. We never waited for the luggage. We never went there 4 hours before they had to go.

This trip was peaceful. We could talk. We could even get up and walk wherever we wanted. We could buy food that didn’t cost $50. I packed our lunch before we left. There was even water… that I didn’t have to buy at the station. The staff, to a person, was completely and thoruoughly pleasant, every time they spoke to us. I liked that. We were rested.

There was a massive train station at the end. A station that you begged it’s walls to tell you what they had seen. I saw 2 fellows playing cards… with a deck of cards, no batteries. There were no televisions blaring breaking stories of someone barricaded inside their home, with no weapon, no hostages, no apparent reason. This train station had seen more fedoras, more pill boxes, more pipes, more cheroots, more… nice clothing, more nice people in a day than… than I am not sure what. But rest assured  it was a lot. And those people, well they were rested also.